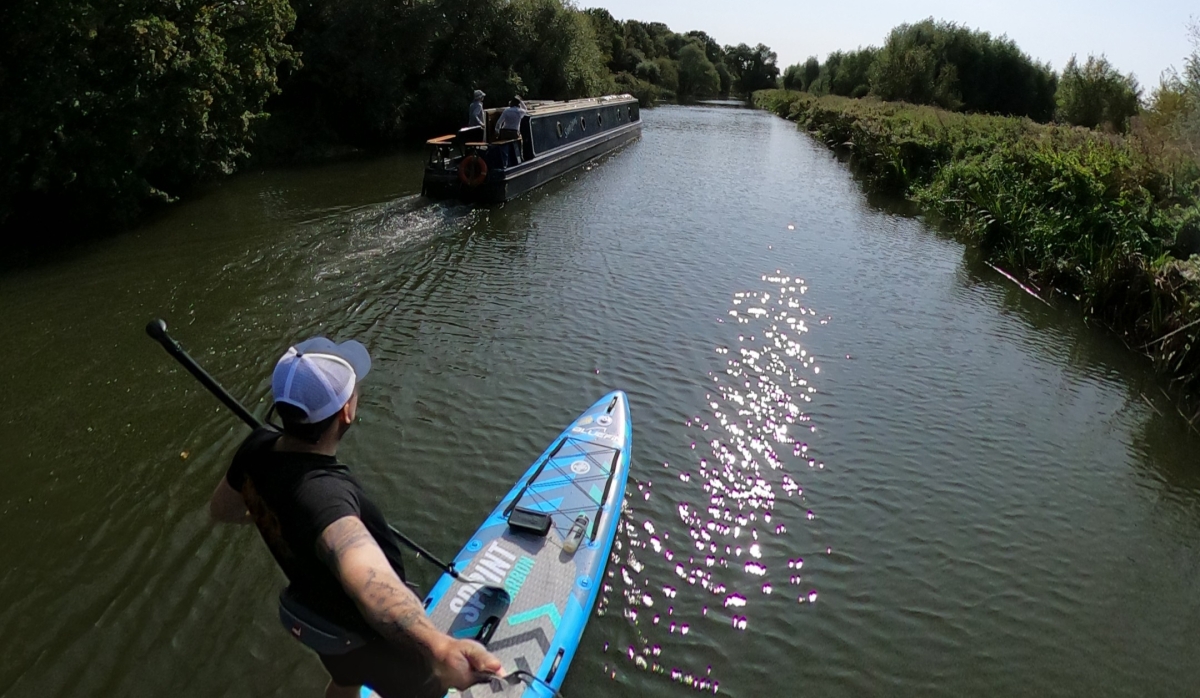 A tough one to write about and discuss.. Paddling during Lockdown 3.0.. With many outlets including the Canal and River Trust and British Canoeing saying it’s OK to paddle.. Is it? Let’s take a look..

The government guidance states that:

Paddling for exercise is permitted within the government measures, so long as you are:

Social distancing – Stay 2 metres apart from anyone not in your household. It sounds daft but I would take a face covering out on the board, some people may be isolating on a boat or barge – you just never know..

Outdoor exercise limits – Exercise should be limited to once per day. It is clearly stated on the Gov.uk site under Exercising.

Travel – Outdoor exercise should be done locally wherever possible, but you can travel a short distance within your area if necessary to find an open space to exercise (such as a publicly accessible place to launch).

“If you break the rules…”

“The police can take action against you if you meet in larger groups. This includes breaking up illegal gatherings and issuing fines (fixed penalty notices)”.

“You can be given a Fixed Penalty Notice of £200 for the first offence, doubling for further offences up to a maximum of £6,400. If you hold, or are involved in holding, an illegal gathering of over 30 people, the police can issue fines of £10,000” – This is a direct extract from the Government website.

Be sensible, those paddles will wait. There is absolutely no need to go exploring right now. Much like the first Lockdown – we are advising Stay at Home and to follow government guidance. You should not be attending waterways you do not know, which in turn could cause further, unnecessary stress on the NHS… Be sensible.

In my opinion and this isn’t guidance..

We are in a National Lockdown so you must follow the Government rules whether you agree or not – not Facebook, not some chaps on Instagram – the Police will simple say you aren’t following the rules and fine you as explained above. Some people will have to accept they cannot paddle right now – harsh reality, but true. Many people that paddle are land locked and cannot get to the waterways – there are other forms of exercise. Looking at the guidance of ‘local’, I would say in your village, or within walking distance.. Driving 15-20+ minutes for water isn’t local, a couple of miles within the same town would seem acceptable but I’ll try to get clarification on this..

When we get more updates through @StandUpPaddleUK we will share them and I will update this post! 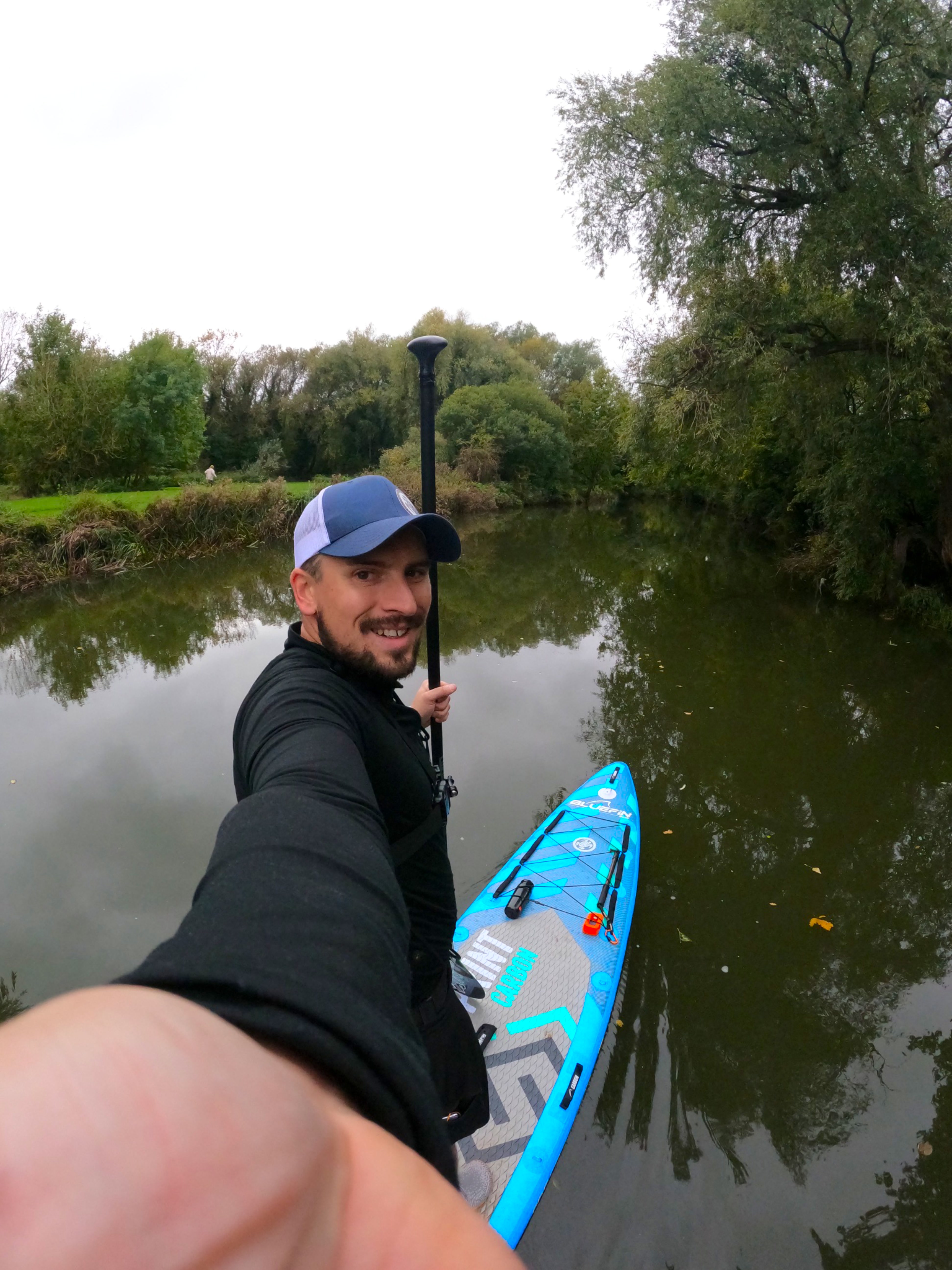 A Review of the Bluefin SUP 2020 Sprint Carbon for @StandUpPaddleUK

Ok so I’m a little ‘behind the 8 ball’ on this one as I’ve had this board since around August (well, a prototype) and then had the SUP Package for a couple of months now. So after a few trips away, and some lake & river testing. I am ready to write this.

Say hello to the redesigned, new and improved, 2020 Sprint Carbon

I knew the folks at BlueFin SUP were looking at 2020 changes. In fact I had a sneak preview some time before they all were dropped – so to see the colour way and deck design changes was awesome. They have not disappointed when you open that box – it is all new and improved.

This is their next generation of Tourer. As a user of the 2019 Sprint I can safely say the upgrade and change is apparent, but not just in its visuals. Coming in at 14ft long, 30inch wide (30.3 to be precise), and 6.2inch thick.. She’s quite a beast. A more flat profile has ensured the nose doesn’t stick too high from the water so you aren’t fighting head winds for the fun of it. They’ve opted for a US Box Fin over last years smart lock central fin – something I agree with as the choice to change fin is something the more experienced paddler will often do (you don’t want to always use the standard surf fin….) and the intro of the smaller side fins is a good idea as they do provide additional stability when on board.

They’ve also upgraded similarly to my 10’8 Cruise Carbon, adding dual chambers ie the ‘Carbon’ standard. This makes the board much more stiffer. I’ve also noticed the board glides in a straight fashion when paddling, something the 2019 suffered with but also could have been some poor technique on my part..

Well, as I said in my opinion this is the best board I’ve ever ridden in the Tourer class. Before you even get out on the water you will notice how well constructed the board is. You can see that the ‘Carbon’ is the flagship of their range. Five different handgrip positions for carrying the board (nose, tail, central grab, either side of centre by the rails), Several different D ring positions (same as last years cruise Carbon and Sprint, I haven’t attached the kayak seat as yet but this will work on this board). It’s not too heavy to carry solo which is obviously quite good considering generally you paddle solo! Weighing in at approximately 22kg* when pumped up, it definitely isn’t the lightest board but you can tell the difference in the rigidity. (*Bluefin confirmed the pumped weight is 22.4kg)

While we’re on the subject of rigidity, this thing is bloody stiff. That was one of my gripes last year with the 2019 model, it didn’t seem stiff enough and When trying to perform a step back turn you could feel the board bowing, that is not the case this year! I’ve knocked out a few step back turns on the 2020 and feels like more of a solid unit. The dual chamber of the board definitely helps.

Given the boards profile this is a touring board, the Sprint name is quite deceptive thinking it might be a race board but it is more for long-distance tours. Given that I predominantly use Rivers and Canals where I live this board is perfect for me. The profile is very much set up for cutting through the water and so far I’ve got nothing but good things to say about using this board on the river.

I was recently in the Lake District and obviously the board came with me. Myself and my girlfriend were staying right next to Ullswater lake so this was a spot I had to paddle. Given that the water was so flat here you really can ride any board, but I was on the Sprint Carbon, so getting up some speed and burning it around the lake was very much on my agenda! As I said previously, super stable even when getting bashed with roller waves from the Ullswater Steamer and local boats, the Sprint cut through all of it with ease, remaining stable in the process.

Click here for a quick IGTV video of the 2020 Sprint Carbon..

As you’ll see on the front of the board, there’s a white attachment – for your camera. There’s been so much uproar and complaint, to various brands, that have moved to this threaded attachment. The attachment for use is simple, a threaded M8 (something like this – https://www.irockersup.com/gopro-compatible-mount/) however if you email BlueFin they will send you one out. The threaded attachment is much safer than the last moulded GoPro mount as they were always prone to snapping after overuse. It’s also a more versatile mount for things other than a camera – I’ve recently seen some cool gear like cup holders, Garmin mounts, Phone holders (I wouldn’t recommend one of these haha!)

Not actually board related – more package..

Sadly yes, there are a couple things, but that is the same with any piece of kit. I love the GoPro Hero 9 but there was many things I wasn’t pleased about!

As with most of BlueFin SUP boards they come as part of a package deal. The board, a triple action Pump, US Box Fin/Smart lock fin 2x, Ankle leash, Board carry strap, Repair kit – all in a Carry Bag. And even now they have upgraded their Paddle to a super lightweight carbon, which is 100% an improvement on last year.

That is the high end of their board range, and I would suggest for anyone looking to get a Tourer but can’t afford this, you should look into the 2019 Sprint. It may have some flaws but it is still an great board which will serve you well.

I have a couple of suggestions, and to be honest it is items which we say to several brands..

It really does need to be pointed out that even now, several months along, Coronavirus has really put a strain on production of all manufacturers including BlueFin being no different. I have seen a lot of negative commenting on places like Facebook but I think a lot of people need to realise that every part of the supply chain is stretched at the moment so you may well have to wait a few more additional days to get your board. Often issues aren’t from the manufacturer of the board, it’s actually the delivery service. Be Patient Paddlers!

Don’t forget to read my article about Quick Release Belts and Leashes – It’s an important one for all paddlers..